Anterior Cruciate Tear of the Knee

The anterior cruciate ligament is the most commonly disrupted knee ligament tear in the knee. Our understanding of its role in knee stability, diagnosis of injury and surgical reconstruction have all advanced in recent years. The anatomy of the human knee is shown in the drawing. The collateral ligaments provide stability in a side to side plane. The anterior and posterior cruciate ligaments provide stability in a front-to-back plane. Additionally, these ligaments which are within the joint, provide a linkage system which guides the complex rolling-gliding motion of the knee. The menisci (cartilage) on both the inside and outside of the knee increase the contact area between the joint surfaces. In this way, they decrease the load on any one area of surface cartilage. A tear of the anterior cruciate is often associated with a meniscal or a collateral ligament tear. These injuries occur most often in athletics, but accidents or work injuries may also disrupt the cruciate if the mechanism of injury is similar. The injury may simply occur with a sudden change in direction while running, or with hypertension of the knee. Often an audible “pop” is heard or a sensation of “tearing” within the knee is felt. Within a few hours or a day, the knee swells and weight-bearing may become difficult.  If left untreated, many knees with this injury become unstable and are referred to as a “trick” knee. They may buckle unexpectedly, especially with rapid changes in direction and result in falls or other injuries.

Approximately one-third of patients who disrupt their anterior cruciate ligament experience few related problems. Another one-third have problems of instability which are activity-related. They are relatively asymptomatic if they modify their activities. They can run straight ahead, but sudden changes in direction may cause “giving way”. The last one-third are symptomatic with activities of daily living. Unexpectedly, the knee may give way. This may be dangerous in some situations or disability at best. Because all anterior cruciate injuries are not associated with symptomatic instability, it is difficult to assess those who will ultimately become symptomatic. Treatment is dependent on what activities each person is willing to give up, as well as their expectations. Patients who should consider surgery are generally athletic and are unwilling to give up at least high-level activities. The highest chance of excellent surgical reconstruction is obtained within the first few months after injury. After this time, there is little change in results as long as no major injuries (meniscal or ligament) occur additionally. Late arthritis is not a natural sequela of cruciate ligament injury. Meniscal (cartilage) tear is more likely to occur in an unstable knee, and meniscal tear is very likely to contribute to late arthritis.

Patients with ACL tear need to avoid recurrent giving way. If these episodes cause pain and swelling, the knee may be progressively damaged. This most commonly occurs with associated meniscal (cartilage tears). Early wear and tear arthritis may eventually develop. When this occurs, surgical reconstruction or modified activities should be considered before these changes occur. Anterior cruciate ligament reconstruction is a surgical procedure performed with knee arthroscopy. Biological tissues Autograft (self) or Allograft (same species, different individual), are the most successful replacements. Artificial ligaments are available but are only licensed for use after biological graft failure. They are now rarely used because of eventual failure. Arthroscopic methods of knee ligament reconstruction have been developed which allow for small incisions, less postoperative pain, and shorter hospital stays. Rehabilitation is also sped up with this method. A strip of patellar tendon or hamstring tendon is used to replace the torn ligament. These are placed by Arthroscopic technique by drilling tunnels into both tibia and femoral attachment sites. The graft is pulled into the knee, locked in place on the femoral side with an interference screw which wedges between the graft and the surrounding bone. The graft is then tensioned on the tibial side and fixed in a similar fashion here. This allows for early protected knee motion. Ligament reconstruction should generally be delayed after acute injury for four weeks. This minimizes the risk of postoperative knee stiffness. Occasionally, surgery needs to be performed early, when a cartilage tear blocks knee motion and normal walking. Associated meniscal tears may require intervention even if the anterior cruciate is not reconstructed. Repairing or removing the torn portion of the meniscus may provide for a more functional knee. Meniscal repair should not significantly alter the course of rehabilitation. The highest level of function will most likely result if all structures are repaired before additional damage occurs. 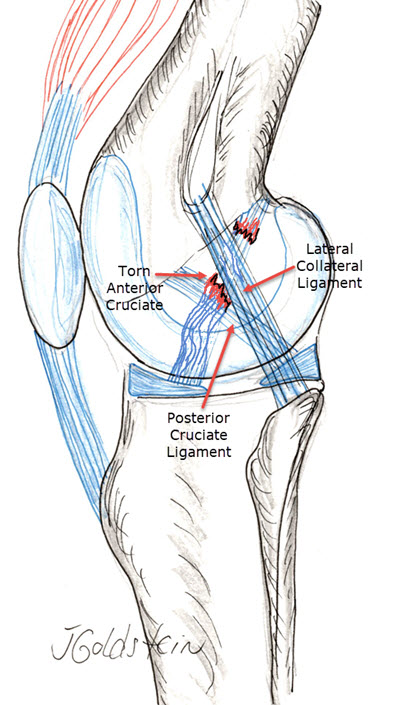 After ACL Reconstruction outlines immediate post-operative guidelines.  Appropriate rehabilitation is essential to successful ligament reconstruction. This often includes formal physical therapy, but in the motivated patient, a well-supervised home program of therapy may suffice. Initially, passive range of motion of the knee and weight-bearing with crutches is begun. A brace is used as a safety precaution for the first four weeks, but a rapid restoration of functional knee motion and strength protects the new healing ligament. Knee extension against resistance should be avoided. This places high loads on the graft during a period when it is slowly revascularizing and regaining strength. It should be avoided for about 4 months. Strength is probably not maximal until at least one year after surgery. Physical therapy must be individualized to each injury and each patient. After Arthroscopy outlines immediate surgical aftercare.

An ACL reconstruction is highly successful. Roughly 90% of patients return to normal or nearly normal knee function. They have little or no pain or swelling. Infection is extremely rare and graft failure occurs in under 5% of patients. The knee should eventually have no greater risk of ligament reinjury than a knee without prior injury. In summary, the anterior cruciate deficient knee is a challenging problem to the knee surgeon. Diagnosis and treatment require careful history and physical exam, X-ray and sometimes MRI (magnetic resonance imaging) to define the precise injury. After diagnosis, treatment options vary with the injury, the patient’s lifestyle and their future expectations.